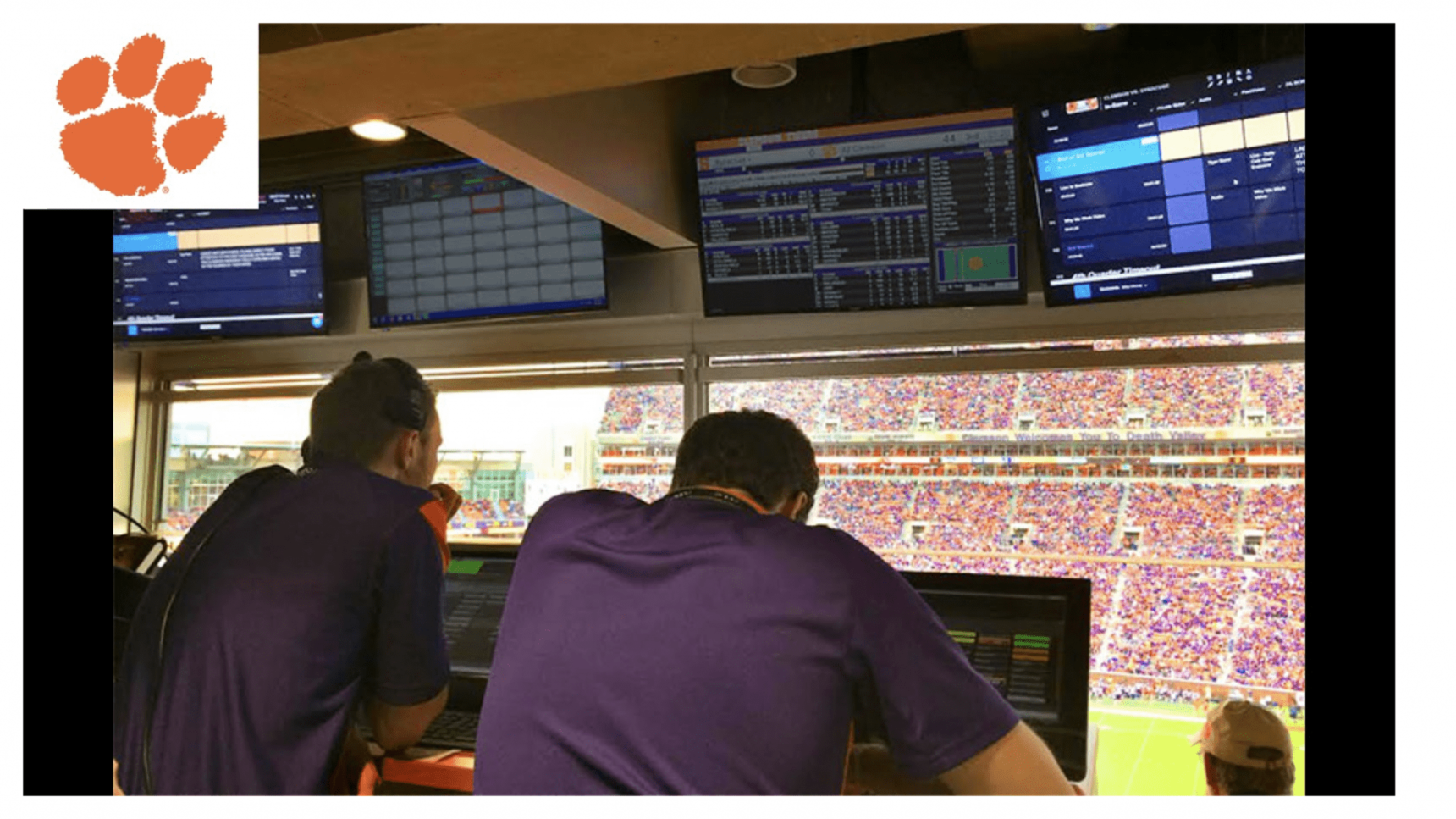 Mike Money, Assistant Athletic Director for Marketing and Game Management at Clemson University, talks about their switch to Shoflo.

“The biggest benefit for us is the improved workflow. Even though we’ve really only just started using it, everyone just pulls up Shoflo and the information is there. Whether it’s myself or someone else inputting information into it, it’s no longer a process. It’s second nature to us already. Shoflo makes life so much easier.”

Mike Money from Clemson University Athletics Department wasn’t looking for a cloud-based scripting software package when he struck up a conversation with the Shoflo team at the IDEA Conference in Detroit.  Mike is the University’s Assistant Athletic Director and game caller for the football and men’s basketball teams. For the past 11 years, Mike had built rundowns and game scripts using Excel and Word and shared them with his team using email. Although the process was long, Mike wasn’t looking to make a change. And Clemson didn’t have a budget for a software scripting system.  “I was pretty stubborn,” laughs Mike. “My way was working great and, honestly, it did work just fine. But I was closed off to other options.”

A test drive of Shoflo “opened his eyes” to opportunities which weren’t currently available to the Clemson team. Mike says: “To be honest, we were blown away. And it takes a lot to convince me to change something we’ve been doing for a long time.” Adopting Shoflo’s cloud scripting software means that Clemson can now input and implement real-time updates during games and create better connectivity between team members in different areas of the campus.

“I didn’t realize just how much time Excel was costing my team until we switched to Shoflo. It really is a game-changer for us in terms of savings.”

Read on to find out how Shoflo helped Clemson to:

One of the first challenges Mike had to face when considering adopting Shoflo was a lack of budget. He hadn’t even anticipated using an online scripting service before test driving Shoflo.  His previous system – using Excel, Word and email updates – may initially appear to be low cost, but was a poor solution in terms of the time taken for the team to write and edit scripts. For Mike, the investment into Shoflo has already paid off:

“We didn’t have a line item budgeted for this so we did have to move some items around to make it happen. At the end of the day, with the amount of time and effort and how it’s brought our scripting process together, it’s been more than worthwhile.”

With a strong team structure already in place, adopting the new software was ultimately going to involve an upfront investment in both time and money for Clemson. With this in mind, Mike stressed the importance of finding a scripting software solution which would ultimately make life easier for his team.

“Shoflo has been a tremendous time saver for us once we had got the script set up and started working from our templates. Previously, if we were making updates in an Excel or Word document, I’d be continuously having to email updates out telling folks ‘hey pay attention to this, pay attention to that, here’s where I made changes.  Now, I don’t have those conversations anymore. Whether it’s our rights holder, our video crew, whoever, they just log into Shoflo and see in real-time what changes have been made. It’s been a huge timesaver for me but, probably more importantly a huge efficiency builder.”

Making fast and easy real-time updates during the game

Paper scripts are static documents. As a show caller, once a game’s in flow, it’s difficult to make changes to a paper script, then communicate any new instructions to your production team. As well as being cost-effective, Shoflo has helped Clemson create more dynamic scripts which are updated as the game progresses.

“The biggest challenge with Excel during a game is that you’re not making any changes on the fly. Your script is what it is – a printed out script. It was not something I had open on a computer. There was no point in changing anything because a change on my computer didn’t mean a change on anyone else’s screen or script. Looking back, it’s an archaic way of scripting and a much slower process.”

Mike describes Clemson’s pre-production meetings as “critical to the lifeblood of our events.” Before adopting Shoflo, Mike would organize a meeting during football game weeks to run through the paper scripts.  The process for making changes to these scripts would involve Mike making notes on the rest of the team’s edits, making those edits then emailing the script back to them. Adopting Shoflo has streamlined pre-production meetings and speeded up the editing process.

“Now it’s a completely different ball game. We don’t hand out scripts in our meetings, we just have Shoflo up on the big TV in the conference room and go through that. Any changes are made on the fly during the meeting. Everyone sees the changes made and if they don’t agree with it or want something else tweaked, we tweak it right there in the meeting as opposed to having to go back, email it back out, find more changes, email it back out again. It’s made production meetings much more efficient and we’re also better prepared for our football games.”

One of Mike’s biggest concerns was whether his team would buy into the change from paper to a cloud-based scripting system. Both the adoption and implementation of the new system went better than Mike could have imagined. “I’ll be honest – one of my biggest concerns going into this was the buy in of our game day constituents: our control room, our PA announcer, the folks that are helping us put on a football game. The conversations with them were amazing. I thought I was going to have to do a huge sell, but they hopped right on board. I think some of those guys were even more excited to have Shoflo and use it on a daily basis than I was!”

“Now, I’ll walk into our Control Room which isn’t even in the football stadium and they’ll have Shoflo up. They’ll have their personal notes, using that column [within Shoflo]. And they’ll tell me it’s the greatest thing that we’ve ever had!”

For the initial training, Mike felt it was important that the onboarding process reflected the structure of the Clemson Athletics team. As the two primary users of Shoflo, Mike and Assistant Director Jordan Plumblee took the lead, ensuring they understood how Shoflo worked before introducing it to the rest of the team. They introduced the rest of the team to Shoflo in a second phone call. After just two separate training calls, Mike says the team was “ready to rock and roll.”

“They [the rest of the team] had a great training session to the point where they felt good using Shoflo after just one phone call. Another aspect that was important to us was that Shoflo was able to bring our old scripts into the software so we weren’t starting over from scratch. It wasn’t an unfamiliar look for us – it kind of gave you the comfort blanket to start from that point.”

Clemson uses Shoflo to script all of its baseball, football and basketball games. The cue software has allowed the team to create more elaborate scripts for a greater number of games.

“As far as the learning curve goes, we started with football which was a daunting task, but almost everyone that works on other sports has some involvement in football, so there’s already that touchpoint there making it so much easier to roll the system out to baseball and basketball.”

And it doesn’t stop there. Clemson is planning to use Shoflo for more sports games and university events. “There’s opportunities, whether it’s here in athletics or even across campus that it can open the door for,” explains Mike.

There’s no going back for the Clemson team

Having used Shoflo now for the first season, we asked Mike if he ever would consider returning to his previous scripting system. “I honestly don’t think I could go back to Excel. Hands held to the fire, I’m sure I could, but at the end of the day, Shoflo’s where it’s at for us.” With the Clemson team now using Shoflo with greater confidence, they’re now in the driving seat, making suggestions to Shoflo’s team on improvements and new features which will make the in-game experience run even smoother.

“One of the cool features of working with Shoflo is their attention to our needs as a customer. They continually ask us for our feedback. I cannot say how awesome it is that something that we’ve asked for in that process all of a sudden pops up in the software. There are not many companies who will answer feedback questions with real life results within their software.To be able to see that on multiple occasions just speaks about their organization and their willingness to be there for their customers.” 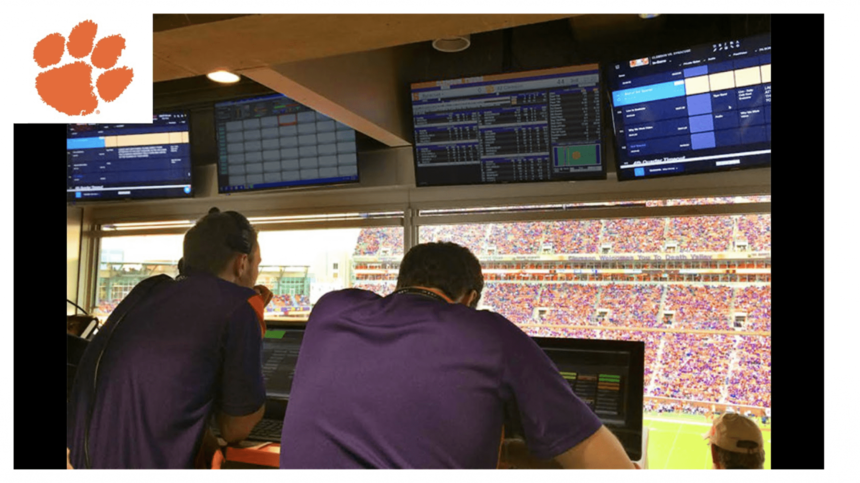 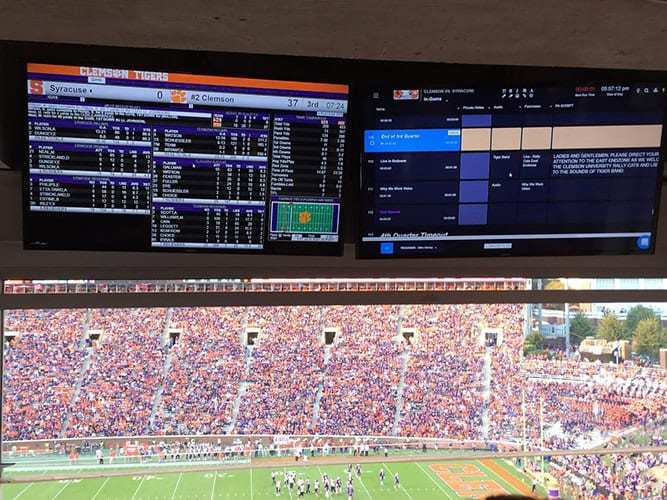 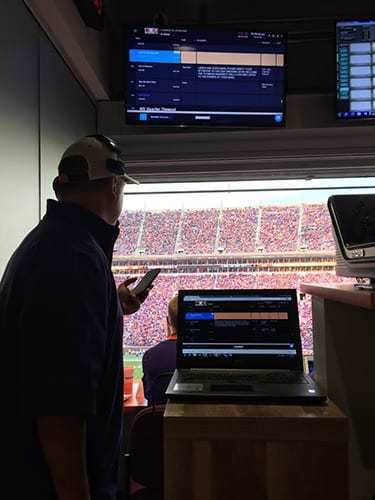