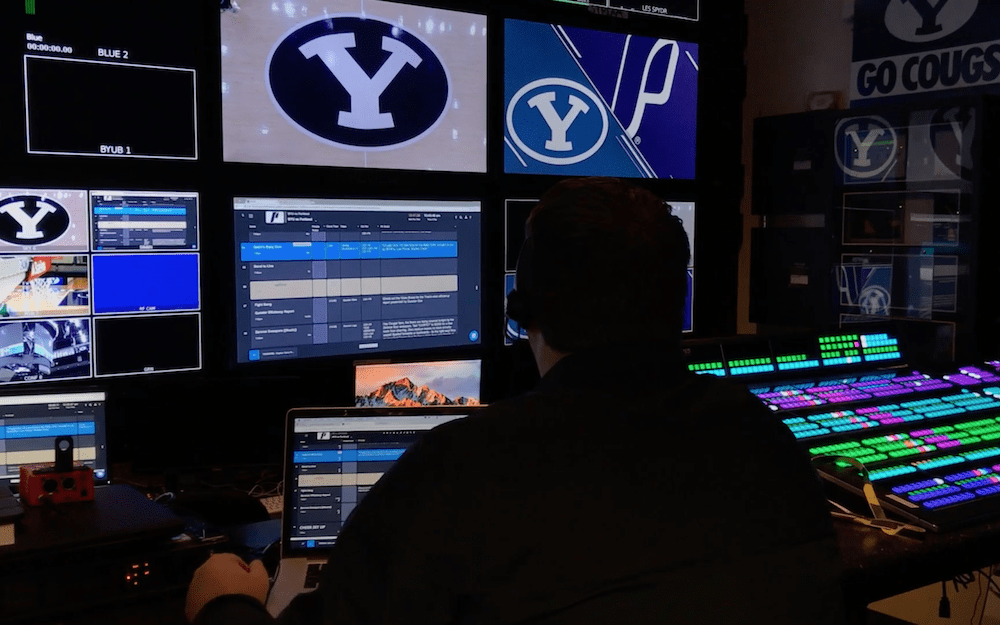 “We were nervous at first, but the switch ended up being awesome! We grow each game with who has access, who is contributing… one of the best things about Shoflo is how my team now has access to things they didn’t have before.”

With a packed program of in-game promotions and contests, BYU Athletics needed a software which could handle real-time edits to game scripts and item changes. Their previous scripting software just couldn’t take the pace – it was slow and didn’t allow the entire team to make their individual contributions.

Switching software mid-season may sound like a gamble for many producers, but for Marketing Coordinator Bryce Lake, adopting Shoflo has resulted in lower stress levels and a better division of tasks within his team. Bryce is responsible for planning and running the shows and in-game production elements for BYU’s football and basketball teams including in-arena and on-court video boards, time outs and half-time video boards.

Just a few games after the switch, the production team at BYU had already benefited from greater collaboration and information sharing, resulting in a better in-game experience for fans and sponsors. Shoflo also helps the team reduce the time taken to write scripts. Before the switch, Bryce would block out a whole day for scriptwriting – now it’s a task he can undertake between meetings.

Read on to find out how Shoflo helped BYU Athletics to:

Bryce describes the midseason switch as “a big decision for us.” While many producers would have waited for the end of the season to implement the change, for BYU Athletics, it was clear from the demo that Shoflo’s real-time updates would improve their in-game experience immediately.

“I was apprehensive at first, just because mid-season anything is rough to do. But once I delved into the program more and met with the Shoflo team, it became apparent to me that the switch was going to be seamless and easy. Probably easier than I made it! I actually wrote out my first script word for word instead of copy-paste just so I could experience the program fully… it was so easy”

Like many teams, BYU originally used Excel to build their scripts, then progressed to another scripting software (TSE ScriptPro).  But they found the system slow, making it difficult for colleagues to add their contributions to scripts and plans. Collaboration between team members was nearly an impossible task,  forcing Bryce to become the sole editor of the program which slowed his script building down.

Switching mid-season was made easier thanks to Shoflo’s range of support, including an in-app chat option, phone calls, and email communication. Event Software Specialist Spencer Naegle explains how the Shoflo team helped BYU to make the switch – and speed up their scripting process from the very first game:

“Bryce had frustrations with his old software’s interface and how it operated… kept him from feeling comfortable inviting his teammates in. After doing a demo of Shoflo, Bryce was really impressed and wanted to start right away but seemed disappointed about waiting until next season. He was ecstatic to know that we could support a mid-season switch and could get him up and running within hours.”  – Spencer Naegle, Shoflo

“As a producer, I’m actually enjoying the game, which is unheard of! [Shoflo] allows me to see things differently, look for ways to engage with our fans and what’s going to get them up and excited. I’m able to focus on other parts of my marketing job instead of worrying about where we are in the script. And that’s a huge, huge plus!”

With his team submitting their information individually, scriptwriting with the old software was a task which would take days to complete. Using Shoflo, Bryce can write a script in just hours. Any last-minute edits to the script are made and communicated to team members with real-time updates.

“It’s made the workflow more efficient and now instead of a day or two producing a script it takes 30 minutes to an hour. I’m actually creating two scripts in an hour and a half now, which is something that I never could do. I used to have to block out a whole day, pull up Hulu catch up on my shows and start scripting: nobody bother me! Now it’s a thing I can do in between meetings.”

Adopting Shoflo has helped the team at BYU Athletics to improve their in-game communication – they can view script updates or last-minute additions instantly on their tablets and mobile devices. Instant edit functions ensure a greater degree of accuracy for BYU’s half-time and time out contests.

“One of the best features is the ability to edit, right there on the spot. We have a lot of promotions where we need the name of the contestant and before we get to that item, I pop in, make the edit and it populates on everybody’s screens. So now, we’re not missing names, we’re never messing them up. When we don’t have time for an element, instead of crossing it out on our paper script and drawing arrows, I can simply just bump it down and it changes for everybody.”

Bryce says adopting Shoflo has reduced the stress levels of his job and helped improve the workflow of in-game production elements. “I know everybody’s following along with me. It makes communication with my team seamless.”

Elora  Draper is the Partner Service Coordinator for BYU Athletics and is responsible for corporate sponsorship for all athletic events. Shoflo’s timestamp and element run reporting helps her to ensure all promotions are run correctly and that clients gain the best value from their sponsorship.

Using Shoflo’s time-stamping functionality, Elora can add time stamps on a per-element basis. This allows her to better track when sponsorship elements were executed during a game and generate an overall sponsorship game report of when elements ran and for how long.

“The previous software was difficult. I would help Bryce with entering promotional items but it wasn’t working well with duplicate users. Switching to something mid-season can be daunting. With Shoflo, I can easily track elements during the game. We went from 25 paper scripts to having one digital format that we all follow live.” – Elora Draper

Bryce believes Shoflo goes beyond just the product and the software – it’s all about creating great events.

“I feel that Shoflo is more invested, more involved in what’s going on. It’s not just about the product. You want to help us make a better show, a better environment, a better atmosphere for our fans. That’s what I think is special about Shoflo – it’s not just a product, it’s a way of being, it’s a way of producing. And that’s awesome!” 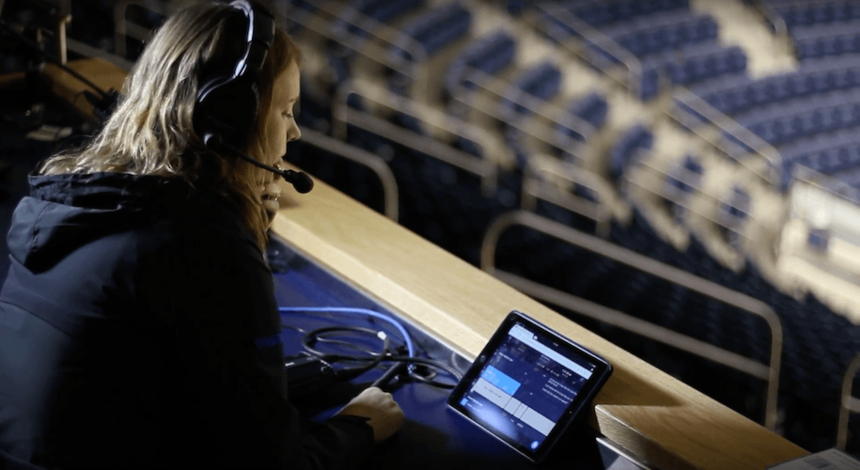 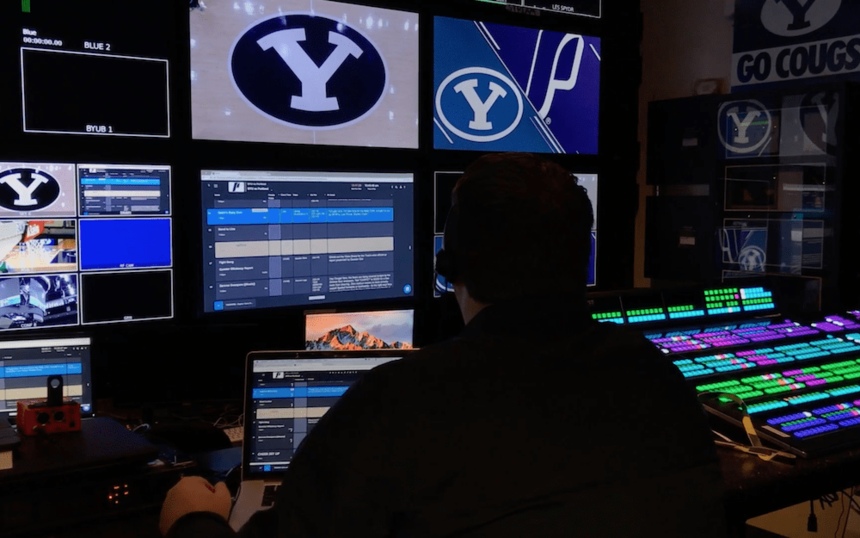 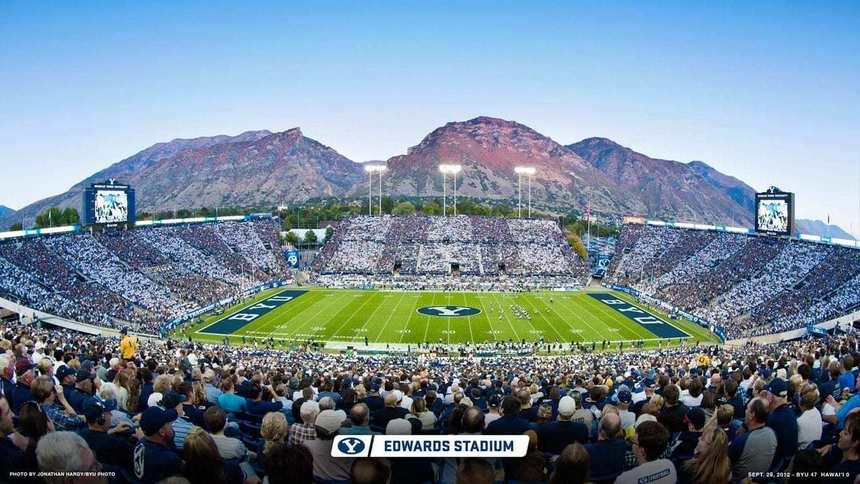